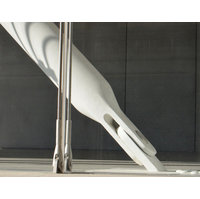 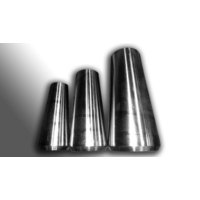 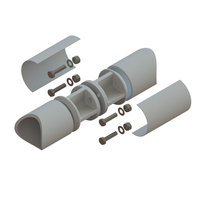 CAST CONNEX® Diablo™ Bolted Splices are cast steel fittings that enable unobtrusive field bolted splices between circular hollow sections. The fittings are designed such that the bolted connection is inboard of the outer diameter of the connected elements. Splices made with Diablo Bolted Splices can be sheathed in thin-gauge plate to completely conceal the splice or can be left uncovered for a sleek, technical connection aesthetic.Diablo Bolted Splices are supplied including drilled bolt holes. All of the fittings can accommodate four fasteners, though our fittings for 12.75-inch (324 mm) outer diameter HSS can also be supplied to accommodate 8 fasteners. Hand wrenches must be used for bolt tensioning in the field. Fasteners and cover plates (if required) are not included.
Rated 5 based on 1 product reviews
BIM CAD SPECS CATALOGS VIDEOS LEED
New - CAST CONNEX® Timber End Connectors™ 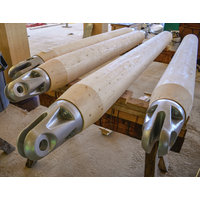 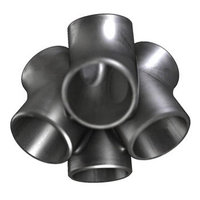 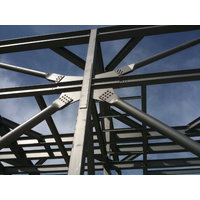 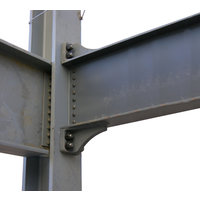 CAST CONNEX® Cast Bolted Brackets- (CBB) are a prequalified connection for Special and Intermediate Steel Moment Frames per AISC 358 and can be used in the retrofit of seismically deficient steel moment framed buildings or in new construction. The CBB moment connection is designed to eliminate field welding and, when used in new construction, to facilitate frame erection. There are two types of CBB available - those accommodating bolted connection to the beam flange (B-series) and those accommodating welded connection to the beam flange (W-series). Both types are designed to enable field bolting of the beam to the column, thus eliminating field welding. The B-series CBB are particularly well-suited to retrofit, as they offer a weld-free option for addressing seismically deficient steel moment frames.
Rated 5 based on 1 product reviews
BIM CAD SPECS CATALOGS VIDEOS LEED
CAST CONNEX® Scorpion™ Yielding Connectors 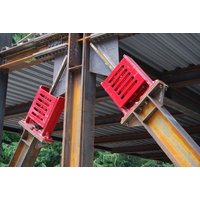 CAST CONNEX® Scorpion™ Yielding Connectors are modular, replaceable, standardized hysteretic fuses that provide enhanced ductility and improved performance in the retrofit of seismically deficient structures or for use in the Seismic Force Resisting System of new structures. Each Scorpion Yielding Connector (SYC) consists of specially designed cast steel and fabricated elements which connect to and transmit forces between the end of a traditional brace member and the beam-column intersection of a concentrically braced frame. The SYC remains elastic during ordinary building service loading and provides energy dissipation during a sizable earthquake through the cyclic inelastic flexural deformation of the SYC's cast steel yielding fingers. The system exhibits a full, symmetric hysteresis characterized by an increase in stiffness at brace elongations greater than the design level. This increase in stiffness is a result of the second-order change in geometry of the yielding fingers, each of which is shaped to promote the spread of plasticity along its entire length. As SYC devices are standardized, the cost and delay associated with additional project-specific testing is typically eliminated. SYCs exhibit a stable and reliable post-yield stiffness which increases at large deformations. This behavior results in a better distribution of yielding over a building's height and decreases the likelihood of the formation of a "soft story," which is a significant concern with bracing elements that provide little or no post-yield stiffness like traditional Buckling Restrained Braces and friction damping systems. Due to the high elastic stiffness of the SYC devices, the brace member selected by the engineer of record has a significant contribution to the elastic stiffness of the assembly. This uncouples the elastic stiffness from the yield load of the brace. With SYCs, engineers can design the system to have a low yield force and a high elastic stiffness, thereby minimizing expected story drifts while simultaneously reducing the seismic forces that develop in the lateral force resisting system during a design-level earthquake. Unlike traditional Buckling Restrained Braces where the core of the brace is not accessible, the yielding fingers of the SYC device can be inspected for signs of significant damage after an earthquake event, offering building owners a way to gauge whether replacement of the brace is necessary. SYC devices can also be more readily replaced following a sizable earthquake. Because all inelastic behavior is confined within the SYCs, engineers are provided with the flexibility to use the devices in several structural configurations, including a single bay, single storey X configuration - a configuration that reduces the number of frames which are obstructed by the lateral force resisting system and, in the case of retrofit, can reduce the costs of replacing building envelope and finishes after installation. SYCs dissipate seismic energy through yielding of specially designed, triangular shaped steel yielding fingers. Unlike friction damping systems, the long-term behaviour of a hysteretic yielding system is well understood and the seismic properties of the device are not dependant on the long-term characteristics of normal force generating elements or frictional surfaces.
Rated 5 based on 1 product reviews
BIM CAD SPECS CATALOGS VIDEOS LEED